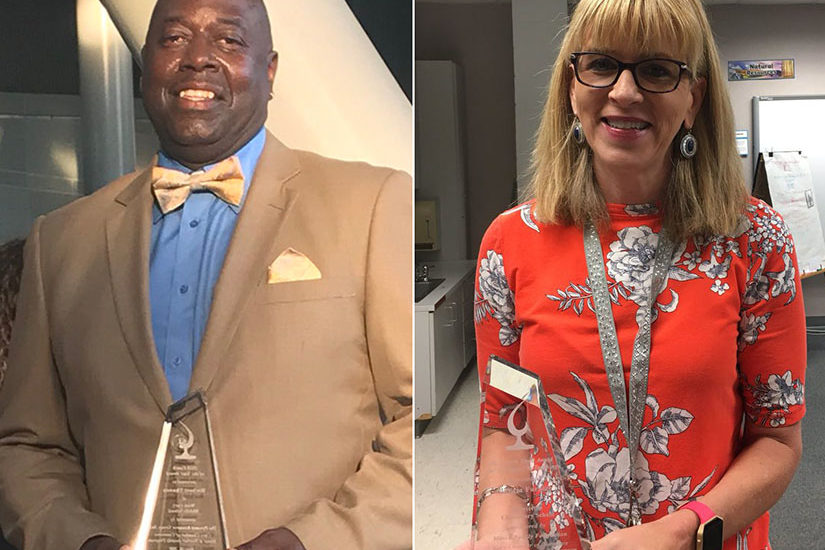 Remember that teacher who saw past your shenanigans and helped unleash your potential as a student? Most successful people I know can cite a turning point in their early lives as a result of some encounter with a great teacher.

Allow me to introduce a unique educator and coach –the kind of coach that gave meaning to the moniker. This man has been a middle and high school basketball, football, baseball, girl basketball, and track coach in some form since 1988.  Though he has coached many sports at regional schools, he seems to have singular focus which is beyond winning. That focus is to prepare students to become confident leaders. This coach is Herbert Thames of West Cary Middle School. He won an award from The Pyramid Resource Group, our coaching company this Monday evening at the Honor a Teacher Awards ceremony that recognizes teachers from around our region. (That’s Barry and me with Coach Thames at the ceremony.)

Principals, peers, parents and students are invited to nominate teachers and coaches at 32 schools in our area each year and award one of those teachers with a $1,000 check and a beautiful trophy.  One parent, a mother wrote the following in her nomination for Coach Thames. “In high school, my son was visiting his dad one weekend and came downstairs and found him dead on the floor. His world came crashing in around him. He had lost his compass and it derailed him in school and in life. He was at a seriously low point in his life and Coach Thames was one of the first people my son reached out to talk to. Coach Thames was always there to listen and keep my son looking forward, and he was instrumental in helping my son get from a very low point in his life to the Dean’s List in college his first year at NCSU. He inspired my son to stay strong, keep going, keep his faith, and that he was worthy. Coach Thames helped build his character back up at that time, just as he does for all the teams he coaches.”

Teacher – one who mentors, coaches, trains, guides, loves, challenges, corrects, champions and is the first counsel outside the home for our children. Their work is a major contribution in any community. A teacher may not even be fully aware of the responsibility that comes with the role when they take that first job.  But they come to realize in short order that their words, tone, and actions can have a long-term impact on a child’s self-esteem and their future. That’s why we all have that story about that one teacher who got us… who saw what we could be or do, when others in our world failed to.  One of my own teachers brought out the actress in me. Another the journalist. They both traveled to universities with me to watch my auditions for drama courses or University Forensic Society competitions. They believed in me, even when I didn’t know how to believe in myself.

Each year, in our area, 25 businesses sponsor an Excellence in Teaching award that is given through the Cary Chamber of Commerce. On Monday, May 18, more than 500 people gathered at Koka Booth Amphitheatre in Cary to mark the occasion and celebrate the gifts of 32 Western Wake educators. The awards program began 20 years ago, when Cary’s Ralph and Daphne Ashworth decided to honor a teacher at Cary High School with the Discovery Award. Our decision to build on the Discovery Award the Ashworth family started, meant there would be two awards given every year, and we quickly determined that there were more businesses interested in partnering to celebrate the quality education found in our community.

My husband and business partner Barry and I approached the Cary Chamber of Commerce and seized the opportunity to help build out the program. We wanted to give back to our community after we won a small business of the year award for our coaching company in 2000, and more importantly, we wanted to honor a teacher who made a dramatic difference in the life of our daughter. Carolyn Chaney was a fifth-grade teacher who made an impact so remarkable that it helped change the educational trajectory of our daughter Jessica, who is now the CEO of her own company, Momentum Learning, based in Durham and Raleigh.  Momentum is an IT education-based program for coding, and a result of a declaration Jessica made while at Enloe High School to one day change the shape of education for people who, like her, had unique interests and learning styles.

The difference we have seen in really good teachers and award-winning teachers over the past 17 years of our involvement is this project is this — really good teachers care about the self-esteem and character of a kid as much as they do about the grades. They exercise a daily curiosity that invites exploration into a deeper self awareness as they unleash new potential. They are exuberant about the smallest successes of a child who demonstrates they learned something new as a result of the class. Those like Chaney invite students to park their fears in troll dolls which sit on the desks. 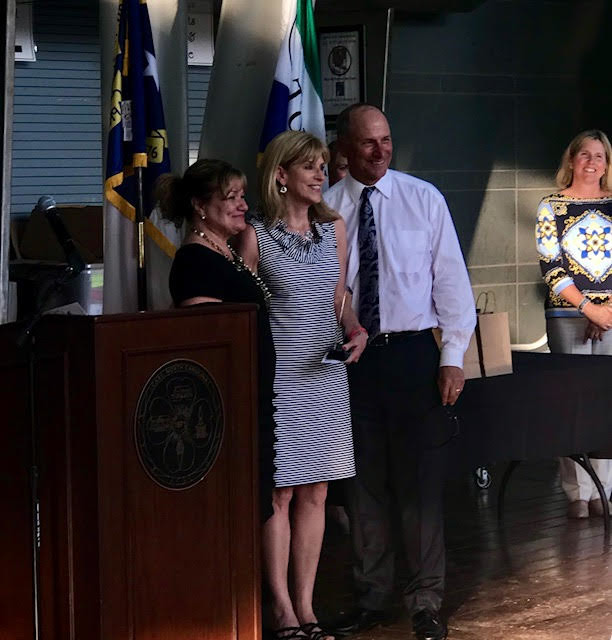 Our business communities need to love our teaching community… and support them…. We need to make sure as business leaders that we create a world that is ready for the students who will lead us one day. I have hope for the future as a result of the stories shared and committed teachers honored this week at this event.

Keep an eye on the Cary Chamber’s website for a complete list of sponsors, schools and teachers recognized and those who won these prestigious awards. www.CaryChamber.com.

Our family foundation also recognized Melissa Furnier (who won for a second time – the first time that has occurred in the history of the program) from Morrisville Elementary with the Clara Knoll Award for Excellence in Teaching. Thank a Teacher! That’s Melissa in the center, pictured with Barry and me at the ceremony.

I suppose if I have an invitation at the end of this blog, it is to prompt every parent, leader, professional or executive who reads this to remember that one person who saw the best in you and helped change your stars.

Do you have a “special teacher” story to share? Who made a difference in your life? Leave your comments below.

This article was originally published on LinkedIn.